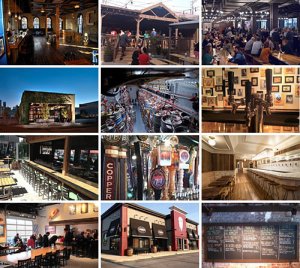 I took your suggestions and my observations; and came up with a list of the 12 best craft-beer bars in America right now (timing-wise the criteria was that they had to have opened or to have made a major change in the last 12 months). Here’s a taste:

It’s American Craft Beer Week, an annual celebration of all things independent in the American beer world. Here then are 12 of the best craft beer bars in the country that opened in the past 12 months or so. These include already-trendy spots in San Diego County (The Bier Garden of Encinitas) and New York City (Proletariat, Tørst); reinvented spaces in the Carolinas’ biggest town (Dillinger’s Taproom in Charlotte) and on the South Boston waterfront (Harpoon’s Brewpub); and a brewpub in Pennsylvania that embraces a somewhat controversial yeast strain (Tired Hand Brewing Company). Below, pull up a stool and grab a pint.