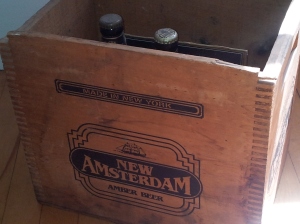 The question was what was the first East Coast beer to place at the Great American Beer Festival. It was New Amsterdam Amber Lager, which nabbed the third spot in the 1984 Consumer Preference Poll, the only competition then at the GABF (the medal categories were added in 1987, and the poll was discontinued in 1990).

New Amsterdam was brewed through the Old New York Brewing Co. out of Manhattan, which contracted with the F.X. Matt Brewing Co. in Utica. Old New York had been started in 1982 by Matthew Reich, then an executive on the business side of Hearst Magazines who taught wine-tasting classes and who had read about the craft beer revolution coming out of the West. It was Joseph Owades, the legendary brewing consultant, who suggested to Reich that he start out contract-brewing because of the high capital and operating costs of building a brewery in New York City; and it was Owades, too, who crafted New Amsterdam Amber.

Reich did open a physical brewery in Manhattan’s Chelsea neighborhood in 1986—a gorgeously capacious 110,000-square-foot brewpub capable of brewing 30,000 barrels annually and with a quiche plate that retailed for $6.75. New Amsterdam—the beer and the brewpub—disappeared, however, by the early 1990s, done in, in large part, by those high capital and operating costs.

Reich was a pioneer in not only bringing craft beer back to the nation’s largest city post-Prohibition. He also understood earlier than most the connection craft beer could have with fine dining. He would tell skeptical retailers and reporters that New Amsterdam was “not for the six-pack drinker. It’s the beer to have if you’re having one. With dinner.” It was a deliberate inversion of the old Schaefer‘s slogan, “The beer to have when you’re having more than one,” and it helped set the tone for craft beer as something worthy of wine-like appreciation.

While researching The Audacity of Hops: The History of America’s Craft Beer Revolution, I reached out to Reich, who generously shared boxes of information with me, including a wooden one (pictured) with bottles of New Amsterdam Amber from the mid-1980s. You better believe I’m saving them.
· How Craft Beer Came to New York City [TomAcitelli.com]