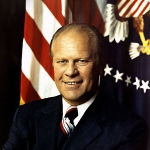 Thirty-eight years ago next month, Congress passed a deep tax cut that helped spur growth in the number of smaller breweries in the United States. A similarly tax-spurred phenomenon is under way in the United Kingdom.

In the U.S., the September 1976 congressional legislation chopped the federal excise tax on beer from $9 to $7 on the first 60,000 barrels—so long as a brewery produced no more than 2 million barrels annually. The United States Brewers Association, led by the formidable Henry King, championed the move; and Stroh Brewing Chairman Peter Stroh nudged fellow Michigander Gerald Ford to sign the legislation without any fuss.

When President Ford (pictured) did so, there were fewer than 100 breweries in the United States and that total was shrinking fast. Due to waves of industrial consolidation, innovations such as the aluminum can, and, quite simply, changing consumer tastes, experts were predicting fewer than 10 American breweries, if not two or three, by the turn of the century, just as the nation’s population neared 300 million.

The story, of course, has been decidedly different. There are now more breweries of all sizes in the United States than at any time since the 1880s. A big reason for that was the more than 20 percent excise-tax cut in September 1976. (As if on cinematic cue, the State of California incorporated New Albion Brewing Co., the first ground-up small brewery in the United States since Prohibition, in October of that year.)

In the United Kingdom, in 2002, Gordon Brown, then the chancellor of the exchequer and later prime minister, pushed through a similar excise-tax cut. Even a key number was the same, though the measures were different. Small British brewers which produce no more than 60,000 hectoliters (or about 50,300 barrels) would be allowed to pay a reduced excise tax—seriously reduced in some cases: Breweries producing no more than 5,000 hectoliters can enjoy a 50 percent cut.

Brown’s move, a dozen years old as of this spring, has led to a flowering of the British beer industry: more than 1,100 breweries, up from fewer than 500 in 2004 and fewer than 200 in the early 1970s, when British brewing—and beer—entered a precipitous decline. That decline’s reversal, according to the Guardian newspaper, “owes much to the progressive beer duty relief for small breweries that Gordon Brown introduced as chancellor in 2002.”

Read the rest at All About Beer magazine.