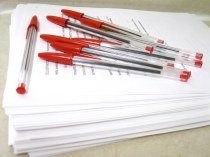 I did a Q-and-A with Craft Brewing Business, and got to talk about some of the research process behind The Audacity of Hops: The History of America’s Craft Beer Revolution. One particular question had to do with whether I felt I had to actively not include any stories or anecdotes (rather than, say, cut for space or clarity).

See, the American craft beer industry, which is rather collegial these days, was not always so. In the 1980s and 1990s, haunted by the notion that the whole thing might just be a passing fad and aware that several early start-ups had gone out of business, the industry was often gripped by existential moments of panic—which spawned anger toward fellow brewers (or, more often than not, at contract brewers). This anger sometimes spawned innuendo, high-school-level gossip among professionals who couldn’t have known the brightest days were ahead.

There were some stories I heard, then, that could not be independently verified; and there were a couple that just seemed complete byproducts of the innuendo. As juicy as the gossip might have been, I did not include it in the history.

From the Craft Brewing Business interview:

“The Audacity of Hops” offers excellent brewer stories. How did you go about tracking down the details? Did you have to cut out any stories?

Plus, there was very little media coverage, trade or consumer, of the craft-beer movement early on. In a lot of cases, I started cold and warmed up through interviews that often began with cold calls and emails out of the blue.

I want to say that everyone I approached in the movement, even if they had bowed out decades ago, was forthcoming and frank, which is a real pleasure for a journalist. In a few cases, movement pioneers mailed or hand delivered boxes and boxes of information they had collected over the years — marketing material, business plans, photos, media clippings, old brewing handbooks — and said, ‘Have at it!’
· ‘The Audacity of Hops’ Author Talks the Tradition and Future of Craft Beer [Craft Brewing Business]